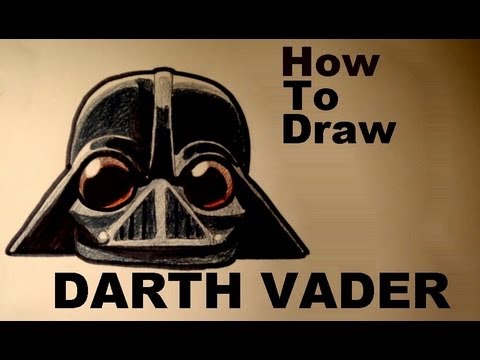 Tutorial about how easily a beginner level artist can give a try to draw an angry birds star wars 2 darth vader is published here today.This in step by step manner is explained quickly and easily.

Another awesome tutorial for angry birds fans is here on our list. We have recieved many suggestions and we finalized your topmost suggestion and its happening now that we are here to draw another angry bird. This time its from star wars 2 darth vader edition of my sweetheart game. This is a step by step video tutorial, so hang up and watch it a couple of times before trying on your own.

As we all know darth vader is a powerful character of star wars and and is an ominous villian whose actions drive the plot of first three films. Darth vader’s character is heavily referenced in all new Star Wars: The Force Awakens, and is highly applauded by audience.

Let us come to angry birds version of darth vader and it looks as amazing as in star wars movie.The powers of Darth Vader are going to make game playing fun and interesting. The inward collapse and then explosion appear to provide a new was to look a flinging the pigs on the dark side. Darth vader can be found on star wars version of angry birds and it can hit your target firstly by a magestic hit and then boom we got an explosion down at the target. These characters are so amazing even adults along with the kids can’t resist to play these little games. With the presence of our favourite star wars characters, it compels more to play angry birds.We are going to tell you how to draw a masked darth vader character of the game. So sharpen your pencils and get ready to go for it.
we hope you watch all our tutorial videos atleast a couple of times so that you can learn most of it. Still can’t get it? watch our previous video on HOW TO DRAW AN ANGRY BIRDS VIDEO TUTORIAL.